"The Stone House", a Stephan Scholten's idea in collaboration with Max Marmi Carrara 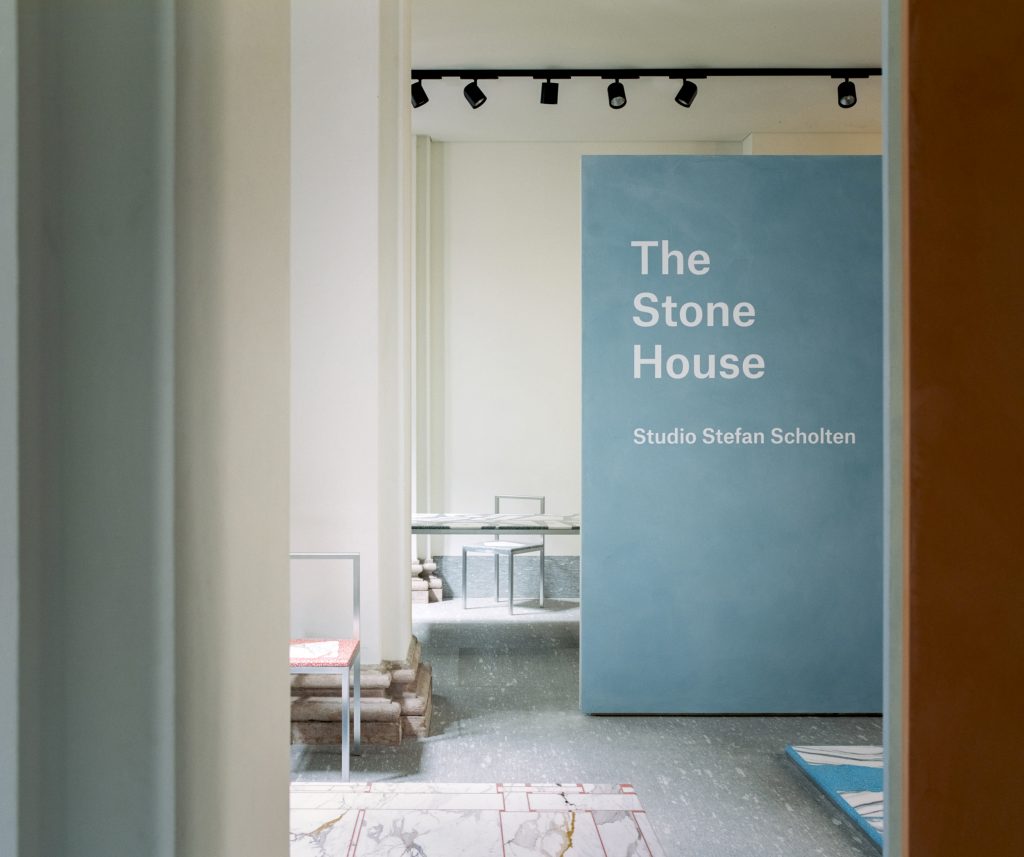 The internationally acclaimed Dutch designer Stefan Scholten will be presenting his latest studio design project, The Stone House, at the Milan Design Week 2021. The architectural installation consists of different ambiances defined by wall elements and furniture made in various types of stone. A suggested house produced of 100% marble and travertine waste. “Stone is a huge source of inspiration for me,” says designer Stefan Scholten. “The natural material is so enormously varied, colorful and with unique patterns. As a result, it offers an endless range of possibilities”.

After carrying out research work on the surprising natural colors and patterns of marbles, with this new project, Stefan Scholten has started to experiment with new color and material combinations. As a colorist, used to the atelier way of working, Stefan and his team have worked along with the masters of the traditional techniques to give a new and irreverent interpretation by designing and creating tailor-made edition pieces.

The Stone House can be seen at Masterly — The Dutch in Milano from Sunday, 5 September through Friday, 10 September 2021 at Palazzo Francesco Turati in the center of Milan. 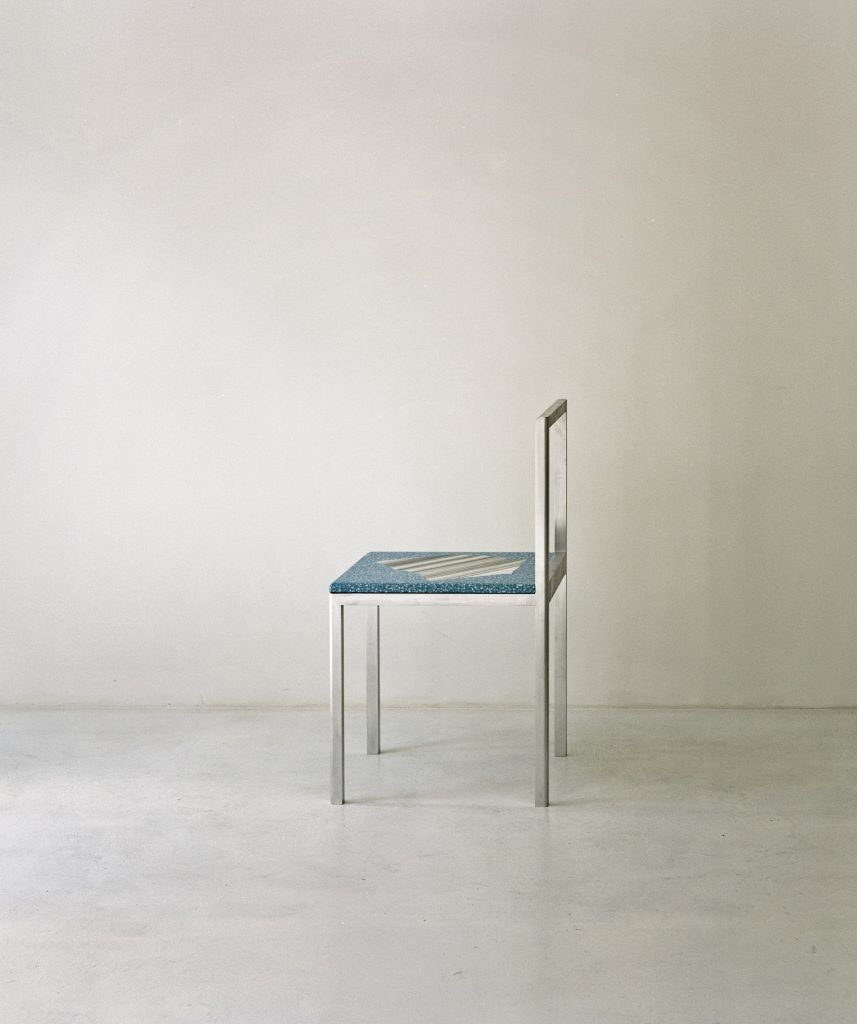 The Stone House is the first solo project of Studio Stefan Scholten after Scholten & Baijings parted ways. He does not view this transition as a closure of an era, but rather as the continuation of his 26-year development as a designer. ‘In designing The Stone House Project I let myself be guided by the use of stone waste and its aesthetic quality.’

Stefan Scholten is a Dutch designer born in 1972. After graduating from the Design Academy Eindhoven he set up Copray & Scholten together with Bob Copray. In 2000 he co-founded the internationally acclaimed design duo Scholten & Baijings. In 2019 he established his own studio, based in Amsterdam. Together with his multidisciplinary team, he has designed products for the industry, while continuously conducting research on form and color. Studio Stefan Scholten works worldwide for clients such as Maharam, HAY, Moroso, Lensvelt, Desso, Gelderland, and Paola Lenti, among others. By applying the atelier way of working, he has been involved in projects ranging from furniture, lighting, and accessories to textiles, consumer electronics, and interior design.

CONCEPT OF THE STONE HOUSE

Stefan Scholten chose to use loose separate walls and interior elements to evoke the suggestion of a house, rather than the building of a complete house with a roof. The house has become a central icon of the time we are living and the place where life happens every day and key subjects are discussed. The environment is certainly one of them. All elements are made of stone waste collected from different quarries. 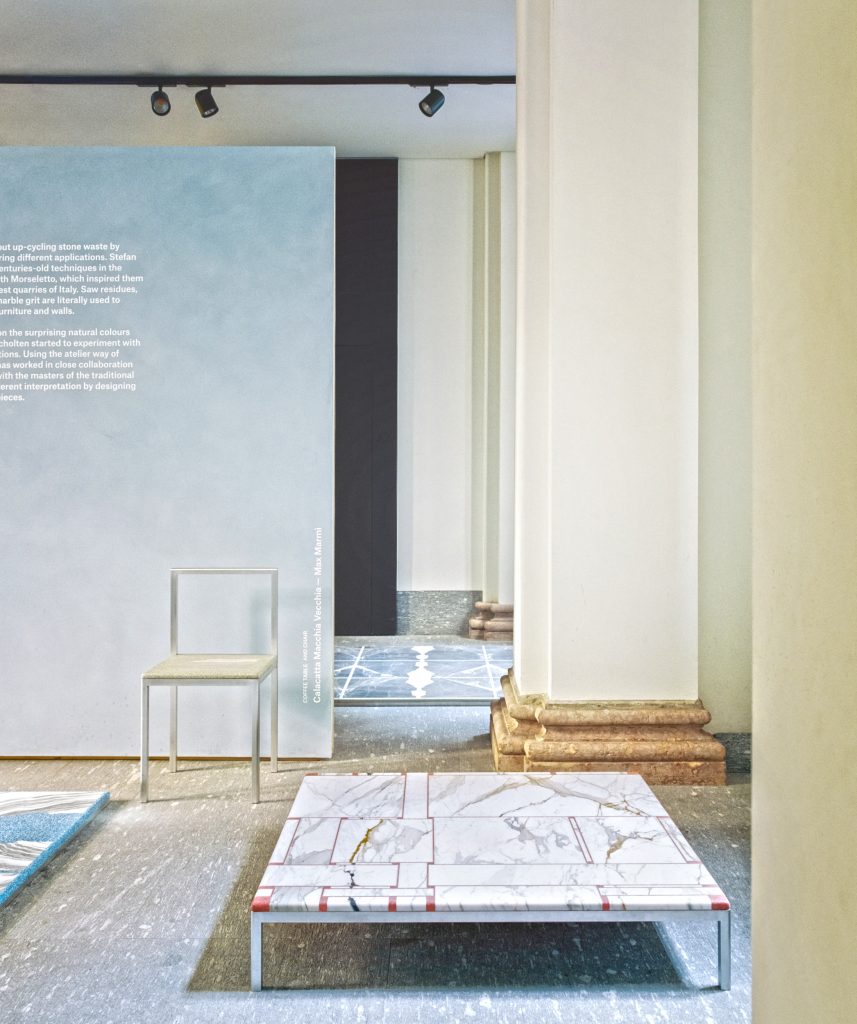 Morseletto http://www.morseletto.com/en/ Laboratorio Morseletto combines an industrial dimension, in terms of production capacity with an artisanal approach providing impeccably high-quality craftsmanship in its own best tradition. In a world of serial, globalized production, the Laboratorio has managed to keep alive a tailored, custom tradition, taking painstaking care over every detail. Thanks to the presence of highly specialized and experienced workers, and of a technical office helping design architects, their solutions are never standardized, but totally customized. Laboratorio Morseletto stands out as a place where different personalities and experiences come together to create a place of culture, research, and human relations. Laboratorio Morseletto produces mosaic, terrazzo, palladiana, marmorino and cement surfaces. The company owns quarries of Pietra di Vicenza.

Calacatta Picasso, The beauty is in the eye of the beholder.

"The beauty is in the eye of the beholder". With these few words Oscar Wild has been able to synthesize an extremely current concept, that diversity is a value that will be appreciated by many, but perhaps not by everyone. The Calacatta Picasso is Italian marble, originally from Garfagnana, which makes diversity its main feature. […]

Max Marmi Carrara accepted the challenge of participating in Marmo+Mac 2021 and did so by trying to communicate, through a somewhat revolutionary booth, its vision. The new balance between man and nature has been represented by a series of volumes, symbols of the stone quarry, and the contrast with the floor of Calacatta Macchia Vecchia® […]

Max Marmi Carrara comes back to Verona. Starting September 29th to October 2nd, Max Marmi will be at Marmo+Mac 2021, the most important international show for the stone industry. Verona is getting ready to host the 2021 edition, the one that we all hope will mark the return to more authentic human relations. Max Marmi […]

Max Marmi Carrara on the side of CON-VIVERE 2021

Max Marmi Carrara considers the natural stone a symbol of culture and development, from ancient civilizations to the present day, and is aware that our challenge for the future will be to rebalance the relationship between man and nature, rediscovering the value of marble, a unique element to be recovered and given to future generations. […]